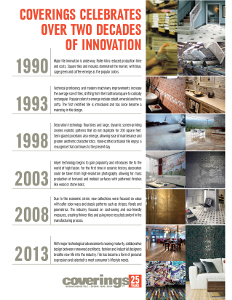 Next year, Coverings will celebrate its 25th Anniversary from April 29—May 2, 2014 at the Las Vegas Convention Center.

Coverings, the first U.S. tile and stone exposition and conference, was founded 25 years ago not only to showcase new products, tools and machinery, but also to provide networking opportunities, training and education on an array of topics from design trends to installation techniques and certification programs.

The show will host an official Anniversary “After-Hours” Party on Wednesday, April 30 from 9 p.m.-11 p.m. at a Las Vegas nightclub to honor this important milestone. The special event will feature an open bar, music, networking and reminiscing. Exhibitors and distributors can purchase up to ten tickets to share with customers. Tickets are $60 each and can be purchased upon show registration at www.coverings.com. Additionally, Coverings attendees will receive a 25th Anniversary commemorative collectible at the show.

The first iteration of Coverings took place in 1990 in Anaheim, Calif., when Tile Expo and The World Exposition of Ceramic Tile and Bathroom Furnishings merged, creating The International Tile Exposition, which later became the International Tile and Stone Exhibition and eventually Coverings. By all accounts the show was a huge achievement, met with enthusiasm and excitement from the first several hundred exhibitors. The inaugural show also accomplished something no one in the industry had been able to do — unite five industry associations under one umbrella: The Ceramic Tile Distributor Association (CTDA), Tile of Spain/Spanish Ceramic Tile Manufacturer’s Association  (ASCER), Ceramics of Italy/Confindustria Ceramica, National Tile Contractors Association (NTCA) and The Tile Council of North America (TCNA).

“It seems nearly impossible that it has been 25 years since my first show,” said Inma Roca, Coverings board member and representative from Tile of Spain. “The show unquestionably hit the mark — finally there was a trade show, and not just an industry conference format event, in North America.”

Since that first show, Coverings has become overwhelmingly the largest and most important international platform for the tile and stone industry in the U.S., with more than 900 exhibitors, more than 70 conference sessions and a myriad of networking events annually — all for free.

“When I look back and see how Coverings has progressed over the years, these words by Peter Drucker come to mind: 'Whenever you see a successful business, someone once made a courageous decision,'” said Luciano Galassini, Coverings board member and deputy director general of Confindustria Ceramica. “By joining forces with other tile associations and creating a tradeshow run by the industry, we've been able to transform the tile market in the U.S. Many things have changed over 25 years, but the show continues to be the best tool for promoting tile in America among distributors, contractors, specifiers and consumers."

The growth of Coverings, however, has come with limitations. While Anaheim proved to be a popular venue in the show’s early years, the sheer size of Coverings restricts the locations where it can take place, which currently includes convention centers in Las Vegas, Orlando, Atlanta and Chicago.

“Each year, we seek to produce a show that is more outstanding, impactful and memorable than the last,” said Karin Fendrich, Coverings show director. “Coverings exhibitors continually showcase outstanding products and inventive booths with international flair, like no other trade show in the United States. Paired with the most comprehensive educational track and numerous networking opportunities, Coverings continues to provide the platform that the industry relies on to thrive and continue its success all year long.”

The show’s owners attribute the growth of the industry to the success of Coverings. In fact, tile consumption has catapulted in the U.S. market from 977 million square feet in 1988 to 3.3 billion square feet at the industry’s peak in 2006, according to U.S. tile consumption data from the Tile Council of North America. During that same time, the industry has witnessed a revolution in technology and design, all taking place at Coverings. From the institution of rectified tiles in 1993 to the introduction of large format tiles in 1998 and inkjet technology gaining popularity around 2003, nearly every aspect of the industry has evolved.

“Since inception, Coverings has been about people and education—and over the years, the show has only improved,” said Svend Hovmand, Coverings board member and representative of the Tile Council of North America. “Coverings has evolved to showcase truly impressive booths, brilliant products, live installation demonstrations, and equally important—our educational track. As tile and stone have become essential to the overall architecture and design of many spaces, Coverings remains critical to fulfilling industry demand.”