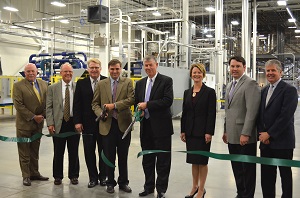 Concurrent with a ribbon cutting ceremony at its newly-expanded LVT manufacturing facility in Madison, Ga., Mannington Mills announced it has committed to another investment at the same location.

The ribbon cutting celebrates the opening of its expanded manufacturing facility, which broke ground one year ago. That facility’s footprint has doubled in size and quadrupled in capacity and significantly increased Mannington’s local workforce.  By early 2015, 219 new jobs will have been added at this site, the manufacturer said.

Along with the celebration, Mannington announced it has purchased 62 acres of nearby land for further development. At the completion of this second expansion, the company estimates its workforce in the Madison area will have increased by more than 300% in five years

“Thanks to Gov. Nathan Deal and officials at the Georgia Department of Economic Development and the Madison-Morgan Chamber of Commerce, as well as the hard work of everyone on the site, we are proud to be here just one year later celebrating the opening of our new production line,” said Russell Grizzle, president and CEO of Mannington.