The winners of the 2019 FCI Installation Award winners have been announced! Click here for more details, or read on for more information about the 2018 winners.

Last month, we took a look at the top Commercial category winners in our fifth annual FCI Installation Awards, sponsored by Schönox HPS North America. This month, we explore the Residential category-winning projects, including an intricate shower installation of marble and island stone, a delicate interplay of red oak and hickory planks leading from the floor and up the stairs, and an installer’s first time installing click LVT in a herringbone pattern.

Congratulations again to all of the winners, and thank you for continuing to elevate the flooring installation trade. 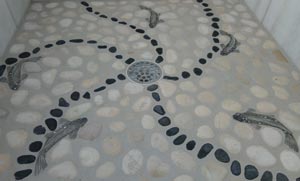 This shower pan features koi fish seemingly swimming toward the drain in a field of white and black rocks. Photo courtesy of Skyro Floors.Ken Ballin, owner of Skyro Floors, had to step out of his comfort zone and mud the pans in several residential shower installations for the Marble Mansion in Long Beach Island, N.J. But the end result was worth the learning curve, he said.

“When I do my own remodels, I have a specific way of doing things. When it comes to showers, I’m a foam guy. I like using Schluter or wedi on my projects. But this was my first project with this builder so I couldn’t be overly picky with the materials and had to make things work,” Ballin explained.

While Ballin has mudded pans in the past, it hadn’t been on this scale. “So I had a buddy come down and show me how to do it. I also reached out to a few people online who talked me through it. When it came time to actually do it, I was off and running.”

Ballin worked directly with the end-user, a high-end client of the builder, to go over her ideas with her. “I ended up changing everything with her, because the layout didn’t lend itself to what she had pictured. She was very thrilled with everything in the end.”

The centerpiece of the installation is a school of koi fish in one of the showers seeming to swim along a radial pattern of black stones as they spiral toward the drain, all atop a field of white stones. “She already had the fish on-site and asked me to stick them around as I saw fit. The black and white stones in the pattern originally came on one sheet, so I took them out and laid them out on my own. It was a really cool project and everyone who has seen the shower pan absolutely loves it.”

Regarding winning an award for this project, Ballin noted, “It means more when your peers recognize you for something. Anybody can post a pretty picture of a project, but to have other people in the trenches understand what it took to get something done—that brings it to another level.” 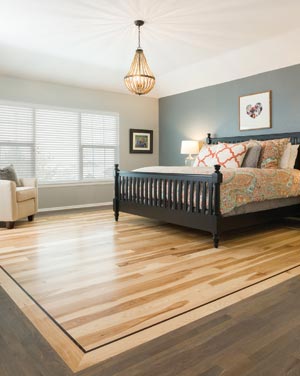 The upstairs bedroom incorporates a field of hickory among the surrounding red oak, and includes a feature strip of wenge. Photo courtesy of Artistic Floors by Design.For this installation at a neighbor’s home, Joseph Rocco, owner of Artistic Floors by Design, was asked to incorporate hickory into a home featuring primarily red oak floors. Rocco had installed hickory in the neighbor’s office almost 10 years before, and now the neighbor wanted hickory on the upstairs level as well.

“Red oak and hickory are two opposite ends of the spectrum. One is red or pink; the other is brown or yellow,” Rocco said. “The neighbor was looking for more of a gray hue but I told him he should stay with natural hickory for the color contrast.”

After that, he let his crew of Kevin Eder and Paul Chaffin take over the project. “This was probably the biggest thing for me—letting my lead guys run the whole job on their own. They were able to take ownership not only of the design but the craftsmanship, and I really want to celebrate them for that.”

The flooring in the project features three different species—red oak, hickory and a small strip of wenge. Additionally, the stairs, wall wrap, handrail and newel posts are all constructed of red oak in five colors. This look was achieved via two types of chemical colorants and two finishes.

In a whimsical touch, the newel posts also feature remote-controlled, color-changing lighting. “Probably my two biggest things in hardwood flooring are lighting and texture,” Rocco explained. “Lighting plays a huge role in how hardwood looks. I thought this would be cool for parties and nightlife kinds of things. Nobody else has something like this, and I figured if they didn’t like it, they didn’t have to turn the LEDs on. It turns out their son loved the LEDs so much, he ran through all the batteries on the first day.”

Since finishing the project, Eder has been awarded Sand and Finish certification from the National Wood Flooring Association. “It lends credence to all of the effort he’s put into learning the trade. And specifically, this award for me is validation and justification that certification and training do pay off,” Rocco noted. 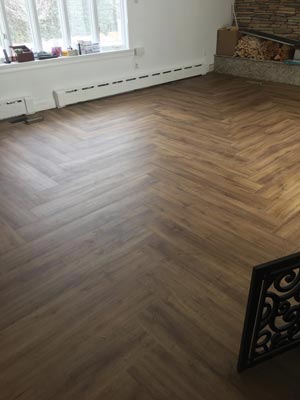 Another view of the award-winning resilient installation. Photo courtesy of Amico Flooring.For this installation in a den in Fitchburg, Mass., the customer wanted the wood-look luxury vinyl plank laid out in a herringbone pattern. Mike Amico, who led the installation, had never installed the product in this configuration before, but after contacting the distributor and then the manufacturer, he was ready to go.

“Because we have experience with ceramic tile and carpeting, the learning curve for us wasn’t that difficult,” noted Wayne Amico, owner of Amico Flooring. “The LVP is really an easy product to work with, and it all went very smoothly as far as creating that type of pattern.”

While the installation went quickly (the entire project was wrapped up in three days), Amico stressed that this type of project should be left to the professionals. “A person new to the product would find this extremely challenging. You need to know where to start in the room, you want the pattern balanced and it can be a little more difficult when you get into corners and smaller areas.”

Generally customers do not choose to go with a herringbone pattern because “the extra waste and the extra cost can be a deterrent,” Amico acknowledged. “The waste means more product—which also means more labor.”

Amico noted that he only took on luxury vinyl five years ago, and he’s amazed at how quickly the product segment has exploded—it makes up about 40 percent of his business now. “The best advantage is it doesn’t require a perfect subfloor. The other advantage is it takes care of the three Ms: mold, mildew and moisture. The product has been astronomical for us.”

He said he is honored to have his business recognized by other installers for this project. “To have this come from people who are actually out in the field is such an honor.”

Looking Back and Looking Forward

From 25 Years Ago to Now: Lessons Learned in the Installation Trade

Michael Chmielecki wrote about the floor covering industry for BNP Media for more than ten years. As editor of Floor Covering Installer and senior editor of Floor Trends, he always sought ways to better connect and inform the installation and contracting community. Mike has a degree in journalism from the University of New Hampshire.