When you need someone to install brick, you typically don’t turn to your expert flooring contractor. That is unless it is brick that is thin… better known as the more complex term “thin brick”. Given the ongoing industrial or vintage design trend, we are seeing the increased integration of thin brick used as an interior finish. Maybe it’s a bit of nostalgia for the days before plaster and drywall covered up what was more than likely a structural element at the time. When people see thin brick used on the interior, it takes them back in time. It is classic, yet cosmopolitan. Thin brick speaks of longevity. It makes the building seem a little sturdier than it would be without the brick. I renovated a 100-year-old home and applied thin brick to one wall. When people see it, they immediately swoon over it and say, “Oh was that part of the original house?” I’m so tempted to tell them it is, but amaze them even more when I tell them it is brand new thin brick. Designers are taking advantage of this in the market today. Now is the time for flooring contractors to not pass up taking advantage of this new opportunity.

About a year ago, I was called by a contractor to be awarded a large flooring contract. He told me that the designer had added about 4,000 square feet of thin brick to the job, but he noticed that I didn’t pick up the few hundred square feet that was on the original plans. He wanted to know why. I informed him that I had done a few small jobs in the past that had thin brick, but typically did not quote it. He asked that I give it a shot. Not a single flooring contractor had quoted the thin brick and the only person he could get to quote it was the exterior mason. We ended up getting an enormous change order for the thin brick all while being a third of the cost of the exterior mason. He kept calling me to make sure he was reading my quote correctly. I know… scary. But we made great money on the project and it went off without a hitch. So, we started training our estimators to pick up the thin brick when they see it on projects and quickly realized we had been missing out on a source of revenue and profit. The contractor told me that the brick mason overpriced it because he didn’t want to mess with anything on the interior. I currently have three jobs going that have thin brick and I completed one job earlier this year that had nothing but thin brick. I haven’t run across another 4,000 square feet of thin brick project yet, but I definitely will not shy away from it when I do. 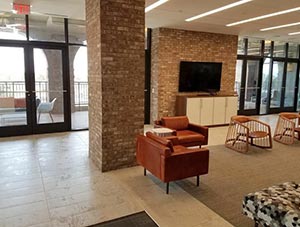 Once you decide to include the thin brick in your estimates, it’s not a far leap to begin figuring out how to install it. It’s basically a subway tile with a much wider grout joint. Setting it with standard thinset, installers have no problem jumping right into installing thin brick. For grout joints, we typically use a 3/8” rope or cord on the horizontal length. With brick it is easy to gauge the vertical joints with your eye. It is a good idea to pull a level line every few courses to make sure you are staying on track, especially on a long wall. Installers may want to earn a little more when installing thin brick for two primary reasons. The first is because thin brick requires an extra step of applying a good coat of grout release agent. It is a must due to the porosity and rough texture of brick. Secondly, thin brick is primarily used on the wall. I haven’t had the opportunity to put any on the floor yet. Walls, by nature, are tall and some can be very tall. One of the walls on the 4,000 square foot job I mentioned earlier was nearly 40’ tall. Of course, most of our normal tile installers don’t ride around daily with scaffolding like an exterior brick mason would. The bottom line is you are going to have to figure a little more money into your job for installing thin brick. Once you are past those two minor hurdles, you can call yourself a thin brick installation company.

Next, you need to learn where to purchase thin brick. If the architect lists the manufacturer and style, simply reach out to them and explain who you are and what you need. I have spoken to more than one brick vendor that is surprised to be talking to a flooring contractor, but once I explain myself they have no problem giving me competitive pricing. Over the past year I have come across a manufacturer that I can buy directly from. This provides more profit opportunity by going straight to the source. They even cut the thin brick in house, so I don’t have to deal with anyone else. It also provides an opportunity when the architect’s unsure of which thin brick they want to use. They can send me a picture that I forward on to my contact with the brick manufacturer to do the work. Because they cut the brick in house, the added bonus is that the manufacturer can offer any brick that they make to be turned into a thin brick. That designer who needed the space to look just a little more rugged will absolutely love you for it. Wait till you tell them you can install it too.