Total Construction Starts Up in February

Total construction starts rose 9% in February to a seasonally adjusted annual rate of $1.013 trillion, according to Dodge Construction Network. Nonresidential building starts swelled 32% due to the start of three large manufacturing facilities. By contrast, residential starts fell 3%, and nonbuilding starts fell by less than 1%. Without the three large manufacturing projects, total construction would have declined 6% in February.

“The manufacturing sector has been an important success story for construction since the pandemic began,” stated Richard Branch, chief economist for Dodge Construction Network. “Domestic producers are expected to seek more control over their supply chains in the future, so that aspect of construction should continue to flourish. However, as evident in February’s data, other sectors are struggling to gain traction in the face of high material prices and worker shortages. The conflict in Ukraine will continue to put upward pressure on costs, making the sector’s recovery more tenuous in 2022.”

Nonresidential building starts jumped 32% in February to a seasonally adjusted annual rate of $385.6 billion. Manufacturing starts more than doubled as three large plants got underway. If not for these three projects, total nonresidential starts would have lost 15%. In February, commercial starts fell 8%, and institutional starts lost 22%.

Regionally, total construction starts in February rose in the Midwest, South Atlantic and West regions, but fell in the Northeast and South Central. 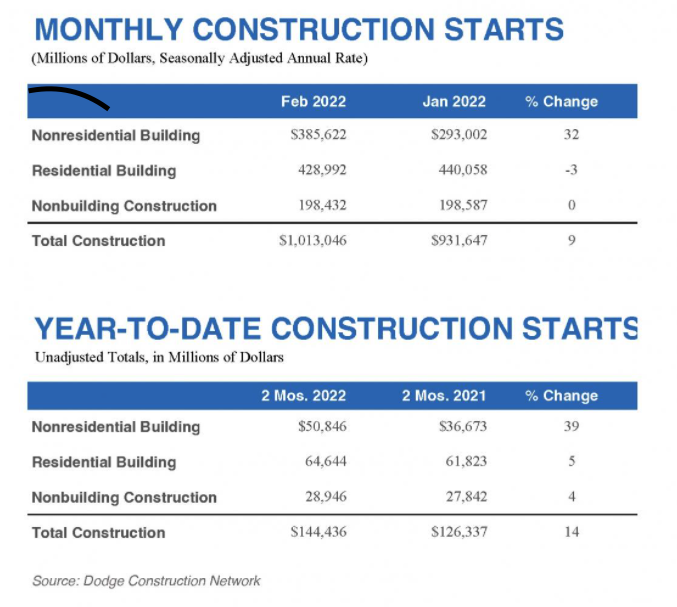