We sat down with David Seland, CEO, ISE Logik, to talk about the work his team did at the St. Frances Hospital-Interquest. The following are excerpts of our conversation, which you can listen to in its entirety at floortrendsmag.com/podcasts. 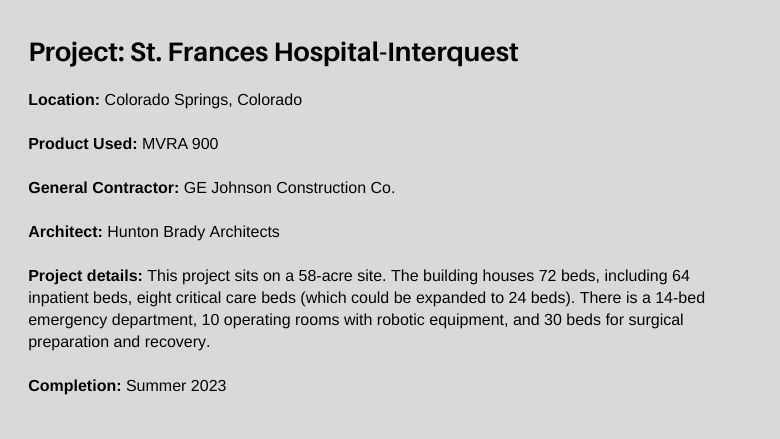 TalkFloor: Tell us about this project.

David Seland: This project was in Colorado Springs, Colorado, and the architect/design firm was out of Florida—Hunton Brady Architects. We had done a number of projects with them in Florida, and so they were utilized for designing this healthcare facility in Colorado Springs. They introduced us to the project team up there, and that's how I got involved there with this project. The general contractor was GE Johnson, and actually it utilized our product on a couple of other smaller projects, but this was a larger health care project—our first one in the Colorado Springs area.

TF: Talk about the admixture used in this project. Why this specific admixture?

Seland: This is our MVRA 900 admixture, and the MVRA is an acronym for moisture, vapor, reduction admixture. One of the things you want to do, whether it's new concrete or existing concrete, but in this case, new concrete…is to control the moisture, and the pH coming out of that concrete that may or may not affect the floor covering, coating, roofing, etc. Instead of addressing that after the concrete was placed, this allows them to be proactive up front and address that with the concrete itself. Our product is mixed in the concrete at the concrete batch plant, delivered to the job site, and then that moisture control is within the concrete itself instead of having to be applied to the top of the concrete down the road, more as a reactive measure versus a proactive measure. 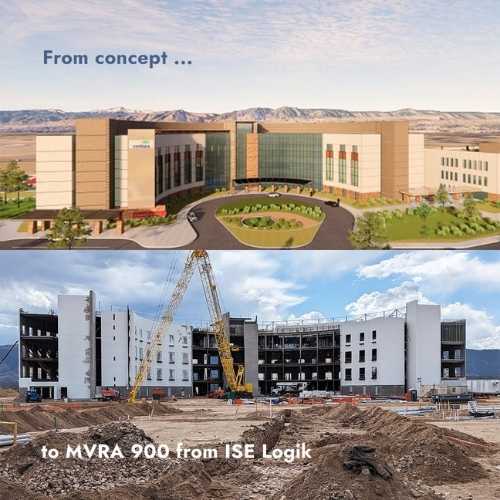 TF: How much square footage did the project cover, and how much concrete was required?

Seland: That was, I believe, right around 140,000 square feet for that facility. I think most of the slabs were in the five-inch thick amount, which is pretty standard for a commercial thickness on concrete—five to six inches thick. The amount of admixture…with our product, in the concrete world, you’d dose ounces per one hundred weight, and that means ounces of your product being dosed to per one hundred pounds of cement per cubic yard. We dose at 12 ounces per 100 weight, so you take one cubic yard of concrete, and let's say there's 600 pounds of cement in there. Of course, you would take 600 divided by 100, that’s six. You take six times 12. It gives you 72 ounces then per cubic yard, so you can kind of dial it back to anywhere from a half a gallon to two-thirds of a gallon is utilized per cubic yard there for a project like that. On a project like that, it was probably right around in the neighborhood of 3,500 yards or so of concrete that was utilized that we add our product into the concrete.

TF: How many trucks are required to bring in that much concrete?

Seland: Each truck has 10 cubic yards. The reason why it's limited to 10 is the weight of the concrete per cubic yard…[plus] the weight of the truck, so obviously anything that goes over highways, road, interstates is restricted by weight and axle weight. That's why it's only 10 yards. I'm sure they would like to haul 50 if they could, but it's only 10. Then you just divide by 10 however many cubic yards you got on a project. If it's 3,500 cubic yards, that's 350 trucks [that go] back and forth. Typically, it's done in different phases over a multi-month period.

TF: What sort of challenges were you guys up against for such a big project?

Seland: It's not so bad for us because that's up to the readymix company and the concrete contractor to deal with. We ship the product there, and shipping, of course, and logistics have been challenging for everybody in the last two years. What normally took four days now is taking eight to 10, but you have to get ahead of the curve on that side. Then, it's pretty much normal—just business as usual with the concrete. They're putting this extra ingredient in there, and then the concrete contractor has to place it according to their standards and some of the things that they come across is ambient conditions, wind, rain, of course, is always an issue. If it's wet and raining, you don't want to place concrete then, and the heat, the sun, the wind, etc, could dry the surface of the concrete too quickly. So, there are evaporation retarders that the concrete contractor utilizes, but they run across those things every day, so it's pretty much standard operating procedure for them. We never got a call about any anything negative occurring during placement. If you don't get a call with a complaint, that's definitely successful.

TF: How long did it take from start to finish to complete the slab?

Seland: I believe that was actually done over a multi-month period of probably five to six months, and so they'll schedule a project like that in different stages. Of course, they'll deal with the foundation work and construction first, and then they'll pour the slabs in different phases between the rift deck and elevated decks. A lot of times, you'll see the on-grade slabs placed towards the end. And so, it’s based upon the schedule for that project that the GC came up with and how they want that in place. Completely relying upon their schedule, and of course, the weather could be a factor in it every once in a while.

TF: How important it is to the flooring installation process for this moisture control product that you guys place into the concrete mix?

Seland: There's been a lot of admixtures out there over the years. Using admixtures in concrete is nothing new. It's been around since the time of the Romans. Admixtures were commercialized really in the early 1900s for concrete…different performance characteristics. By the 1940s and ‘50s, it really took off as the technology changed and progressed with what different performance characteristics you could derive from different admixtures and different technologies. When it comes to moisture control and the pH control for coming out of the concrete, we're actually taking a Division 09 problem of moisture, pH, etc., that can have a negative effect on the floor covering system and dealing with that in Division 03. Division 03 is the concrete side. Of course, Division 09 is floor covering. We like to say, we're a Division 03 solution for a Division 09 problem. What that does is it takes that moisture control issue out of the reactive stage after the concrete is placed in the proactive stage. It's delivered with the concrete and that way, when it comes to the schedule for putting on the floor covering, we don't have to worry about the moisture and the pH because it's a warranted system to a 100 percent RH and maximum pH. We're controlling that and locked that in the concrete, so we're not having that issue outside of that surface into the floor covering, coating, adhesive, etc.

TF: Is there anything else that you'd like to add?

Seland: I would say one last thing on that is the time factor. When you deliver the concrete with the moisture control already in place, how much time you're adding to the project for moisture control is zero—zero time. In everything else, there's a time element involved that you've got to deal with it after the fact. Obviously we can't do this on concrete that’s existing, renovation, etc. It's not an option at that point. At least on the new concrete side, it is that option to deal with moisture control with zero time added for the project team.