Karen and Daris Mulkin: A Story of Love and Loyalty

For nearly 30 years, Daris and Karen Mulkin devoted their lives to training the next generations of flooring installers. In honor of their many years of service, the International Certified Flooring Installers (CFI) inducted the beloved couple into the Hall of Fame at this year’s CFI Convention in Orlando, Florida.

Like a scene from a movie, the Mulkins stepped toward the stage to be honored while a room filled with CFI members rose with applause. Even if you are not CFI, you were that day. The sense of community filling the space enveloped everyone, and it appeared there wasn’t a dry eye in the room.

Those who were involved with CFI during the early years were all volunteers, according to Dave Garden, executive director of education, CFI. Daris and Karen volunteered countless hours and thousands of miles, helping to pave the way for future flooring installers.

“They would get in Daris’ truck on Thursday or Friday and drive to whatever location the certification was held and help certify,” Garden said. “They drove or flew to over 150 certifications—most of them together. People do not volunteer like that unless they are committed to sharing their craft. Their commitment along with others helped mold my commitment. They are a team in every sense of the word. We are fortunate to have them around.”

Daris fell into flooring after a stint in the military. In 1966, he was wrapping up four years of active duty with the U.S. Navy. Stationed in Pensacola, Florida, Daris had spent time turning wrenches on military aircrafts. He married his high school sweetheart while serving.

The couple returned to Minnesota, where Daris grew up, and he began working in the flooring department of a furniture store. A buddy from the Navy, who was living in Michigan, reached out to Daris regarding work. Daris, his wife and his son moved to Michigan where Daris picked up similar work in other stores. After 18 years of marriage, the relationship dissolved, and then Daris met Karen. She was also divorced with two children.

In 1984, Daris and Karen decided to get married. That same year, Daris and two friends opened a flooring business together. Aces Three was born. According to Karen, they called it Aces Three because an “A” would be at the top of the Yellow Pages printed directory under flooring. Aces Three evolved into Rugs By Design, which Daris ran successfully until his retirement in December 2021.

CFI, which was founded in 1993 by Jim and Jane Walker, made a big impact on the Mulkin’s lives.

“When Daris heard that Jim Walker was coming to our area to speak—he had heard a lot about him—we came back early from vacation so Daris could go,” Karen said.

Daris attended the Flint CFI certification, and Jane directed Daris to the area where the certifications were taking place.

Karen joined him at the next event held in Lansing, where she remembers Jane saying, “Come with me. I have things for you to do.” Karen became responsible for handling the paperwork involved in the certification process as well as any other duties that arose.

“Karen was running the table at my certification,” Garden said. “Imagine that: Jane, Karen, and a third young lady helped out the 60-plus installers that had more questions than they could possibly have answers. I remember it like yesterday. Every time an installer would ask a paperwork question, the certifier would send them to the table. Karen was also a timekeeper. I can remember many times as a junior certifier seeing Karen in the back of the room on a Friday night tapping her watch and whispering as loud as she could for Daris to speed up the demonstrations. Daris liked to tell stories. Karen kept people organized. She also always had a bowl of candy to hand out to instructors to keep them energized.” 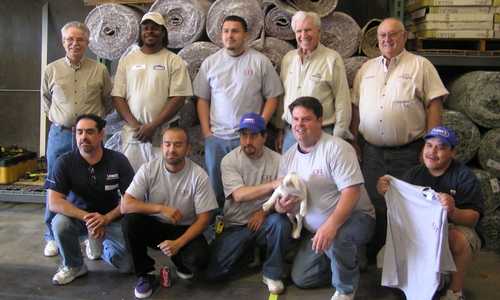 Daris’ and Karen’s memories are long. Their stories are rich and filled with laughter and good times shared with so many, but what is most remarkable about them is their humility. They talk about their time with CFI and the many installers they certified with a great deal of love and loyalty.

Daris recalls having to pull one young man aside after turning in the written portion of his test with no answers circled and only his name on the test.

“I took the test to Jane and she says, ‘What’s the problem here?’ I didn’t have any idea,” Daris said. “Right off the top, she says, ‘He can’t read! Ask him if you can read him the test. He has to give you the answers.’”

Daris explained from that point on he and other certifiers then began pulling aside the installers who could not read to discreetly administer their written test. As for the young man, Daris spoke with him after the certification and encouraged him to take a literacy course for, at the very least, the sake of his daughter who would enjoy bedtime stories read to her by her father.

“Daris not only mentored young certifiers, but he also took time to walk the younger installers through the ‘tru-cut’ method for step upholstery,” Garden said. “His patience with young installers meant that he was generally the person to stay by the steps and teach proper installation methods. Daris also pushed young members to get involved with CFI instead of watching.”

The stories don’t stop there. Daris remembers a prank that his “lovely wife” and one of the other certifiers pulled on him with a rental car. “I was usually the driver of the rental car…picking everybody up at the airport…and during the certification, Karen came over and said, ‘I need the car keys,’” said Daris.

He goes on to explain that under the guise of needing to run to Staples for office supplies, she and one of the certifiers swapped out the rental car with an identical one that was wrecked in the rear.

Upon seeing the car Daris said, “Oh no! What am I going to do now? It’s a rental car!”

While Daris is on the phone telling this story, Karen yells, “Call Jane!” They both burst into laughter and Daris admits he tried to open the door while everyone was watching. He then realized that the original rental car is sitting nearby and that he had been pranked.

While at the Hall of Fame ceremony, the couple didn’t have the words to express how they felt about the honor, but there is no hiding the sound of happy tears when asked about it.

“It is unbelievable,” said Karen.

“It still feels awesome,” Daris said. “I would’ve thanked everybody and tell ‘em how much we loved ‘em.”