I bought the 13” Brutus Vinyl Floor Cutter out of pure necessity. It was the only cutter locally available at one of the big box hardware stores, and at $149, it is one of the more reasonably priced guillotine cutters on the market. The Brutus must be assembled before use, but with the supplied tools and hardware, assembly is a breeze and takes almost no time at all. I found the Brutus to be sturdy but still lightweight. 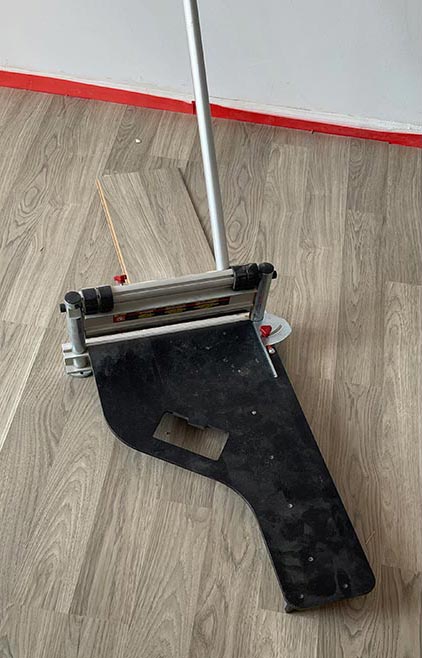 At $149, the Brutus Vinyl Floor Cutter is one of the more reasonably priced guillotine cutters on the market.

With a 13” blade and an extra-long handle for added leverage, the Brutus can be a bit bulky and cumbersome to move around a jobsite. By loosening three screws, the handle can be removed, so the Brutus will take up less space during transport.

The Brutus claims to be able to cut through 12mm (.47 in) laminate, 10mm (.39 in) engineered hardwood and 5 mm (.2 in) LVP. I fully believe and endorse these claims. The second job I used the Brutus on was a 3/8” thick natural acacia engineered hardwood. At first, the Brutus cut through the acacia like butter, but by the end of the job, this became a major con of the Brutus. Using it to cut through engineered hardwood quickly dulls the blade. I had a very difficult time finding replacement blades locally. I visited multiple different stores, and not only could I not find a 13” blade specifically for the Brutus, but I also couldn’t find a generic blade locally. They are available online, but when you need one right this minute, online isn’t very helpful. With all things considered, I would say the Brutus is one cutter every hard surface floor layer should have in their truck.

Want to share what’s in your truck?
Shoot us an email at millerbe@bnpmedia.com.

Floor Academy Briefing: How Much Do You Really Need to Make?