In this multi-phase commercial project in Lubbock, Texas, moisture mitigation was addressed on the frontend in preparation for the finishes. The initial phase was 64,000 square feet but according to David Seland, CEO, ISE Logik Industries, which specializes in moisture mitigation admixtures and topical treatments for concrete, the project will be three to four times that by completion.

We sat down with Seland to talk about the work his team did at Lubbock-Cooper High School. The following are excerpts of our conversation, which you can listen to in its entirety at floortrendsmag.com/podcasts.

TalkFloor: Tell us about this project and where the project is located.

David Seland: This is a new school project in Lubbock, Texas. [There is] kind of an interesting background on this. Myself and Bill Roper, our Western regional manager who deals a lot with the A&D firms and the architect firms, was in Lubbock and had a meeting with Parkhill, the architect firm there. One of the ways they dealt with moisture control in new concrete was to put down some type of a topical system to control that moisture, and they were quite interested with this new approach of dealing with the moisture up front inside the concrete. And so, after quite a bit of discussion with them and the engineering firm, this is the path they chose in this project. It was a fairly recent project too. The school's not even open yet. It's an ongoing project right now with the finishes being installed.

TF: Tell us about the admixture. I know that you are utilizing the MVRA 900 in this particular project, but why select that product for this project specifically?

Seland: Yeah, that's right. The MVRA 900—that’s our moisture vapor reduction admixture. With this project, they had a lot of resilient type floor coverings. They knew that they were going to need to control the moisture and pH one way or the other. So, utilizing this product and process, we could control that moisture and pH that would come out of the concrete right up front in the concrete delivered to the jobsite—a proactive versus reactive approach. Again, it's a Division 03 solution in the concrete for a Division 09 problem.

TF: This project covered 64,000 square feet. How much concrete is required to cover that much ground, and how much admixture goes into that? 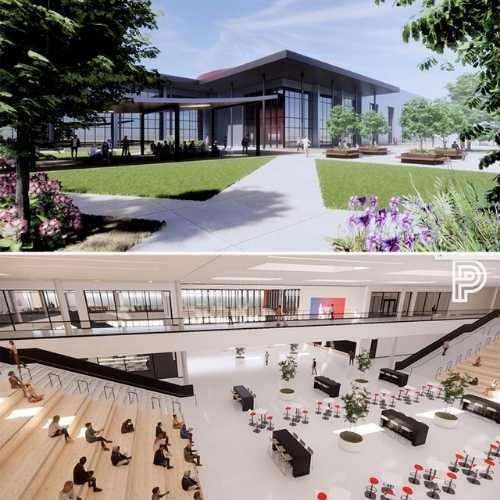 TF: Were you up against any challenges on this project?

Seland: Not really that that we were aware of. We shipped our product, and the shipping was on time and the trucks got there. We know some of those challenges that rise up on shipping and logistics in this day and age. Being in West Texas, you always got the summertime placement, high winds, and hot sun. The concrete contractor has to deal with those challenges, but they've got a lot of tools in their belt to deal with that. Whether it's evaporation retarders they might utilize to spray on the surface of the concrete during the curing process. Also, you'll see where a jobsite concrete contractor will schedule a placement on the concrete early in the morning. It's not unusual to start placing concrete at 4 a.m. in hot areas in the summertime, and so they want to be completed with that concrete and start finishing it off by mid-morning to late morning.

TF: How long did it take to complete the slab from start to finish?

Seland: I think from start to finish, by the time they broke ground to the time they're going to be completed with this project, it's probably over a year's time, with slabs being placed over about a six to eight month period.

TF: How important is moisture control to the flooring installation process?

Seland: That's a fairly important process because on the floorcovering side when the installation contractor gets there, they're going to have to address that moisture in the concrete and the pH. If it has not been addressed up front with our system, they're going to have to address it reactively, and this way with our process it's ready to go for installation out of the gate when the installer gets there. Obviously, they’re going to have to do a bond test and porosity checks and stuff like that. We're not eliminating that from the system, but as far as the moisture goes, we're warranted to 100 percent relative humidity (RH). So just like, [when you] put down a topical system that's 100 percent RH, we have that same type of warranty to 100 percent RH inside the concrete. It's ready to go, and the project teams love it because now they don't have to add that extra time for the topical moisture mitigation systems.