Is Lack of Service the New Normal?

We recently did a tile installation of a backsplash. The designer had picked the tile to go on the backsplash and when we were dry-fitting the material we noticed the pieces didn’t fit (Photo 1). I contacted the designer, told her about my concerns and she directed me to the sales representative from the distributor. I contacted the distributor rep (who works for a company that starts with a state’s name) and explained that the small square stones on the tile were up to 1/16” oversized.

I was really surprised at his response. He stated, “I’ve been selling a lot of this material and you’re the only one having any issues. If you would like, I can have one of the contractors who is using it right now tell you how to install it.” The rep added that “yes, it’s a tight fit but you’ll just have to work with it.”

Really? I know how to install it, and it’s not a tight fit—it’s a no fit! (Photo 2) We ended up having to remove approximately 50 small square pieces of stone, cutting them down to fit and then installing them after we had set the tile (Photos 3 and 4). I thought he would at least say something to the effect of “let me notify my supplier so they can make sure they do their quality control.” And how about a couple of bags of thin set or something that would show they cared about our lost time? 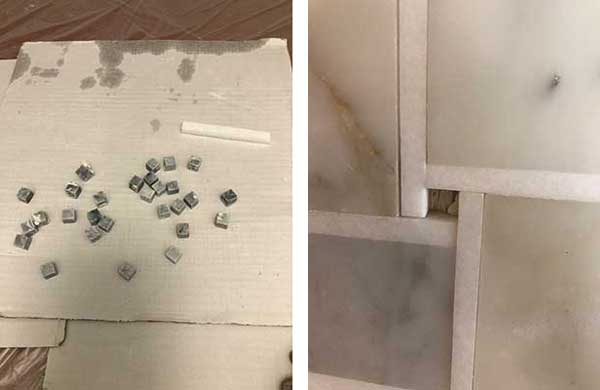 What I got was basically a slap in the face and an attitude of “it is what it is and you’ll just have to deal with it.” If manufacturers and distributors actually knew how often we, as contractors, make things happen on a daily basis they would be shocked—or maybe some of them just don’t care about the installer and are more concerned about their bottom line.

Maybe we as contractors should take more of a stand, but as professionals we turn the problems that manufacturers and distributors give us into installations that make our customers feel good and the industry look good (Photos 5 and 6).

A lot of contractors go the extra mile to complete the job and minimize delays, which was our case. It would have taken a week or two to get the tile had we refused to install it, which would have put the project behind schedule. Through experience we know that on any project there may be issues, so we try to factor that into our estimates just for those contingencies. One thing we’ve learned over the years is that if you don’t allow that extra wiggle room, it can end up costing you. Time is money, after all.

So, is this the new normal, not getting the service we deserve even though we are striving to do our best as professionals? I guess I’m old school, where a handshake means something and when you have a problem or concern, you do what you can to make it right rather than leaving your client to fend for themselves.

Jon Namba is an independent industry consultant, trainer and speaker. He recently completed a term as the president of the NWFA Certified Professionals. His background includes roles as an installer, former WFCA director of technical services and former CFI executive director.

First and foremost, realize that a utility knife—preferably...

Thank you for this information, Mr. Jon Namba,...